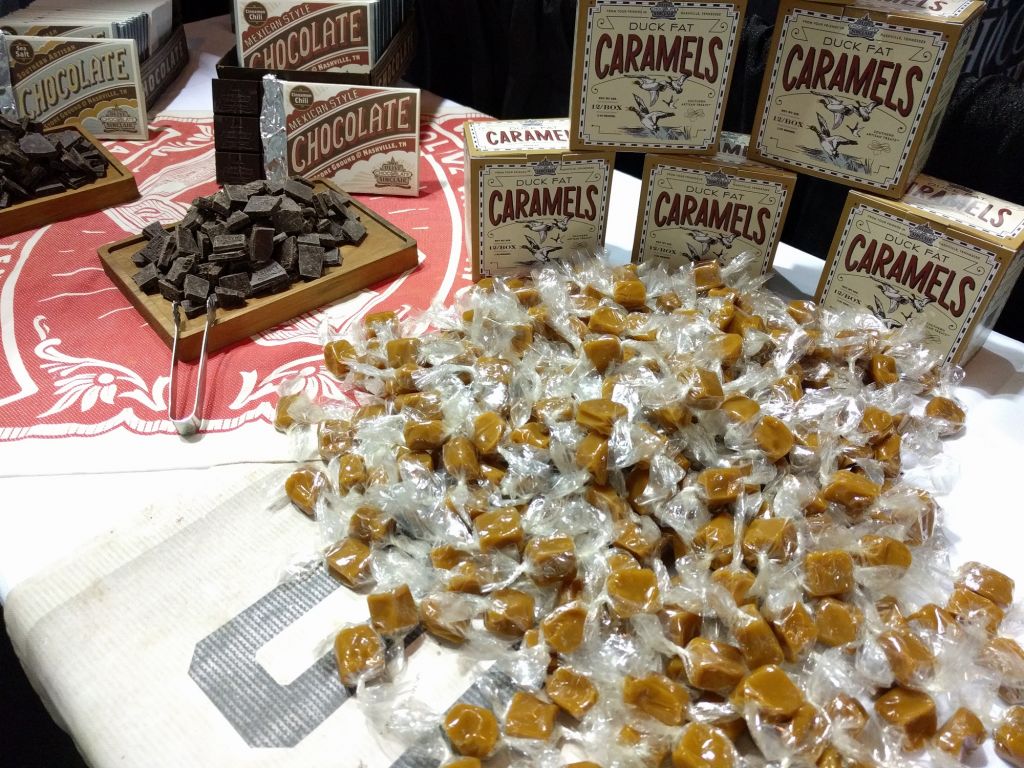 Note: this is from the 2017 archives of Seattle Dessert Geek. I’m moving my archives over and this was a sponsored post in which I was given a media pass.

So! Last week I was at the Winter Fancy Food Show, the biggest food festival you can only attend as press or trade. And boy, do I have trends for you!

First, let me set the stage for what attending feels like. Imagine two Costcos or Sam’s Clubs, squished together, and empty. (If you’re local to San Francisco, it’s the entire floor space of the Moscone Center.) Fill them with rows and rows of trade show booths. Only instead of brochures, they’re offering food, or soup, or drinks. Everyone at each of the booths is important, usually a VP of Marketing or President. And everyone around you is important, from hotel buyers to celebrities.

And did I mention that they feed you? A lot? You’re basically exhausted by day three.

(Because of this, I almost crashed into Duff Goldberg my first year. That was embarrassing.)

It will also change how you view food, because almost all the major specialty products you get in stores, from cheese to cookies, come from this conference. This is both good (“Oh hey! I saw this get released! Cool!”) and awkward (“Yeah, I remember that booth. And that one. Annnnd that one…”).

This was the first year (for me at least) where we were allowed to take samples out of the show. Thanks to that, my physical therapist is currently yelling at me, and my kitchen table is covered in snacks I still need to review with a clean palate. I regret nothing, especially not the afterparties.

Now, the fun part: what will be on shelves coming up.

Brazilian cheese bread. Apparently, pao de queijo’s time has come – with every cute name under the sun, or just as “Brazilian Cheese Bread.” (I can so see the marketing decisions that led to the names. I also think we should learn to pronounce the names of tasty foods.) And in every flavor. Lots of pizza options, because they’re probably going after the kids of people who grew up on Bagel Bites.

WAY more healthy variations of things. Almost every snack had six to nine grams of protein. (But were still plenty high in carbs, making my former dietician cringe without even knowing why.) High protein chips, more granola. If it could have added protein or be made without something, it was happening. Same to Whole 30.

The rise of sesame. Sesame and black sesame both – often along with nori. In everything. Mainly sweet, but I also saw Japanese nori/furikake style popcorn.

More gluten free/paleo options. My friends with allergies are going to be thrilled. (I consider this distinct from ‘healthy’ in that these are dietary restrictions, not reduced sugar/added protein type things.) Lots and lots of paleo baking mixes, gluten free breads. The world is becoming your allergy friendly oyster.

Moringa as the next “superfood.” There were three booths on moringa, calling it everything from the “next kale” to something that belongs in every food, soup to nuts. (Beyond my ethical concerns with previous superfoods like quinoa and their impacts on food equity, it’s a really awkward trend name. Sheesh, beans and rice are a superfood.) And yes, they were putting it in EVERYTHING. I skipped the margaritas, but Thei said they were nice.

Dark milk chocolate. I spotted this at the NW Chocolate Festival last year, and here I saw more of it. I’m most excited for Marana, a Peruvian chocolate maker that’s offering three micro-regions: Piura, San Martin, and Cusco. It’ll make for some fun tastings!

Cheese in everything. I love cheese. I’m still not sure what to make of the cheese fudge I tried that was made with havarti. Maybe they’re trying to cash in on the high protein trend?

Any trends you want to try from the Winter Fancy Food Show?