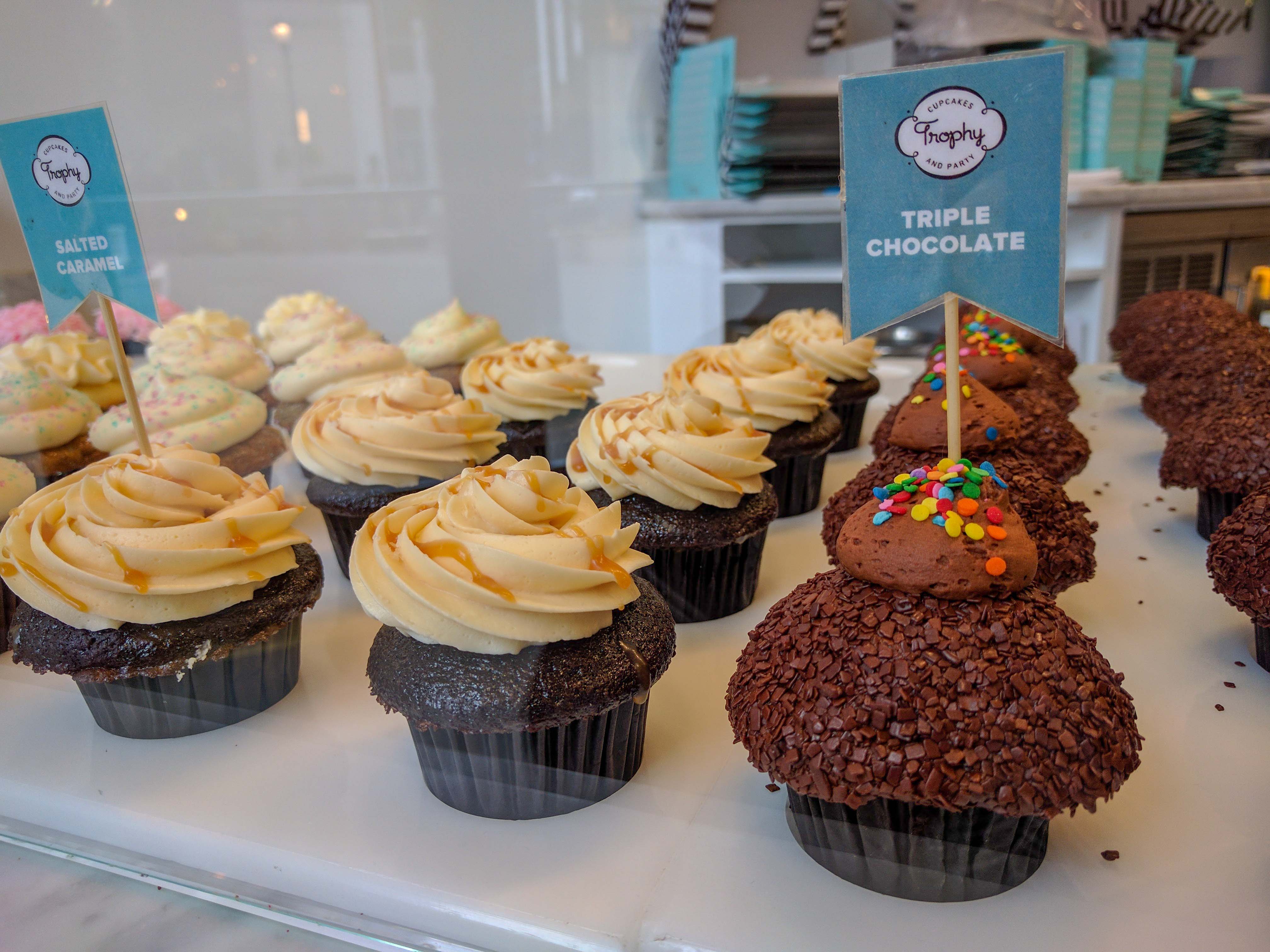 In which Jennifer Shea of Cafe Trophy and Trophy Cupcakes and I talk cupcakes. And frosting. And tea time.

Note: this interview happened in February 2017 as part of my Seattle Dessert Geek archives. I’m moving it here because I’m consolidating and bringing the relevant content along.

First, Jennifer Shea, the owner and founder and baker extraordinaire of Trophy Cupcakes, walked over and handed me this before walking back to the kitchen.

And then we chatted – mainly about the Birthday cupcake, because, um, have you seen this thing?

Now you’ll notice that this is being posted in March, which is too late – the Birthday Cupcake is gone for the season, right? Not. So. Fast. This is some exclusive info, people. Read on to hear about the future of the Birthday Cupcake, the growth of Cafe Trophy, and upcoming menu options. I’m hungry already.

Look, I just want to get to the cupcakes. Read on!

Jessica Tupper: So, walk me through the execution of the sprinkles and luster dust in [the Birthday Cupcake], because I’m curious about how this actually gets constructed without destroying a kitchen.

Jennifer Shea: So we start with the funfetti cupcake – that’s our vanilla butter cake which is a little bit denser than the vanilla style cake. That helps be a stable canvas for this crazy mess.

The next thing I did was create a custom sprinkle mix where I took, y’know, things that are my favorite from the kitchen: so pastels, stars are in there, glitter stars are in there, the big round candy balls, the sixlets, a little bit of rainbow nonpareils, and so I just made this crazy mix which made me really happy and edged it in that. Then just started kind of building the architecture of that.

I start with the doughnut holes kind of towards the middle to anchor the weight, ‘cause if you put it too far in the back the cupcake just tips over immediately. Then the birthday cake macaron goes on, then I put on the stripey marshmallow which is called a puffy pole, in case you didn’t know.

JS: Wafer cookie that’s dipped in gold disco dust, and then the rest – well, the little lollipop is really popped in back to kind of hold things up, and then the rest is balanced. The rainbow ,meringue  – I do use a little bit of buttercream on that to keep it stable,  but everything else is sort of either glued with buttercream or sort of balanced in there.

JT: Out of curiosity, how much is made in house?

JS: About half of it. I mean, we’re buying the marshmallow, I really liked those stripey ends, and the wafer cookies, those are my favorite. [And] y’know, the lollipop, but I’m making all the little stripey meringues ‘cause those are one of my new obsessions.

JT: YES! You’d mentioned before I started recording there was going to be a David Bowie version. Details.

JS:  Now that we’ve created [the Birthday Cupcake] and it’s been so popular, of course my brain is going to all the incarnations that could be similar to this. And I recently found galaxy disco dust, which is black with rainbow glitter when you turn it, and then we have the amazing lightning bolt sprinkles from Geeky Hostess, and I thought about making a David Bowie version of this cupcake.

I still don’t know what the macaron would be, and exactly all the details, but it’s gonna be amazing.

JT: One thing I definitely wanted to ask about is that this feels like the first time I’ve come into the store where I’ve felt like Cafe Trophy has really come into its own. And what do you feel like’s happening next for Cafe Trophy? Because this feels like a very established menu, and very distinct from Trophy Cupcakes now.

JS: Yeah. It definitely took us a few months. I think that I was a little naive, thinking that “Oh, y’know, I figured out how to make Trophy Cupcakes successful, and this will just be.” I don’t think I was naive enough to think that it was going to be easy, but it was way harder than I thought to build a whole menu off in another direction. So getting our sea legs, so to speak, really took months.

People are loving our tarts, especially the mini bites, like you tried, and those I love because, y’know, you either can indulge and have five or you can just have one and try something. So I definitely think we’ll be experimenting a lot more with those.

JS: That idea is on the table. We’ve been talking about weekend high tea, and so I think that’s kind of the next goal. Especially now that we can serve tea, but I think that a mimosa bar with high tea would be nice too.

JT: So what is happening next with Cafe Trophy? Of what I ate, what’s sticking around for a bit longer? I know the Birthday Cupcake’s not going to be around too much longer.

JS: The Birthday Cupcake plan is that it’s just through [February]. But, just like I was saying with this David Bowie idea, because people are loving this so much, I think one thing that could happen is this stays on the menu, and you can just order it online. We might not have them in the shops every day, so that if you do need a very special birthday cupcake it’s there for you. But then I’m excited to play with all of the incarnations. What would it look like if it was for Valentine’s Day, St. Patrick’s Day, y’know, everything moving forward and customizing them.

And then I’m really excited to do more of the jarred desserts, ‘cuz we’re getting back into spring. I don’t know from the beginning if you saw the bavarois that we had – it was very summery, and so we pulled it for the winter. But that was one of my all time favorite desserts, and I think we’ll do that in a couple of different flavors.

JT: One last question. What do you wish people knew about Cafe Trophy now as it is, separate from Trophy Cupcakes?

JS: I feel like a lot of Trophy fans haven’t even visited it. So I just want them to know that it’s here, that we have a full market of really awesome curated beer and wine that they can either purchase to take home or sit and enjoy like you were talking about. And I guess just that we have a whole other menu.

This interview was edited for length. I was also given a ton of treats by Cafe Trophy; all opinions are my own.