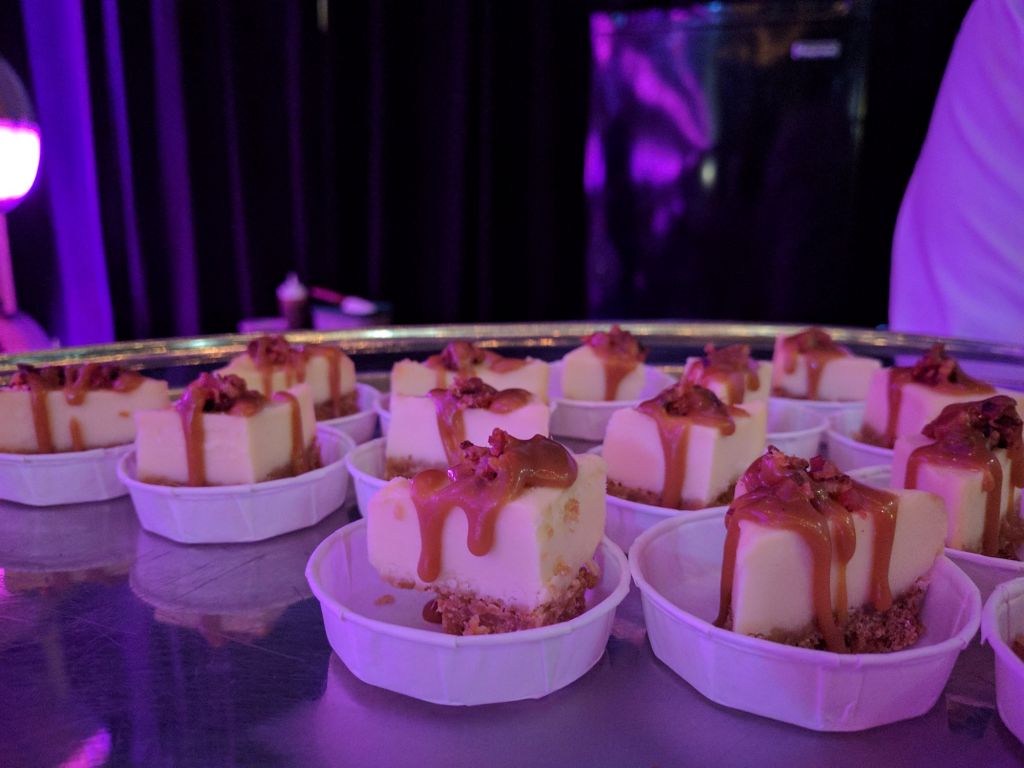 No one really covers the desserts at Taste Washington, so this year I am!

Note: this is part of my 2017 archives from Seattle Dessert Geek. I’m consolidating my archives, and Taste Washington previously sponsored me for this post. And it’s still worthwhile information.

Because even a dessert geek gets amused at the idea of watching Tom Douglas make teeny tiny crab cakes.

I was media this year, which also gave the benefit of VIP access. (Seriously, that extra hour is critical. Thank you Washington Wine Commission for hosting me!)

For those of you who haven’t been before, let me set the stage. As soon as you walk in, you see rows and rows of wine and cheese, bites as far as the eye can see. To the right, more vendors – and a few food trucks. To the left side are most of the desserts, ready for when you need a sweet break. (And coffee, in case what you really need is caffeine.) Now you have 4-5 hours to eat and drink your way through it all – and you’ll do the same thing tomorrow if you booked a weekend pass. You know you won’t try everything, but you also know you’ll have a great time exploring it all. That is Taste Washington.

The dessert space had three different truffle vendors, two ice creams, a cheesecake, doughnuts, coffee, and dessert wine. (The third ice cream maker was to the side, doing its thing.)

A few things really stood out this year. First, the custom ice cream. The fact that you could not only get liquid nitrogen ice cream to order, but grab ingredients for other booths and make custom creations was incredibly special.

Next, the fact that it was basically Truffle Central 2017. We’re talking three truffle vendors ranging from traditional but fun (Dolcetta) to really ridiculous (Intrigue). And Evolve had truffle logs with flavors like guava, in case you hadn’t had enough ganache goodness. And on top of that Scarlatta was selling truffles, so you pretty much could get your chocolate fill.

Honestly, my big thing is I really wish they offered a Designated Driver badge. It’s not cheap to go (we’re talking ~$200 for a single weekend VIP pass), but for a food geek like me who doesn’t drink much I’d love the chance to bring friends to go around and nibble. Because there are some epic bites, especially in the savory stuff, and I wish I could make a weekend of nibbles.

The moral here: if you can, go, eat all the tasty things, be in a food and wine coma for days. It’s an experience we’ll all hopefully get to have at least once.

I was hosted as media for Taste Washington, which gave me a press pass for Saturday of the event. All opinions are my own.